Our ride up the Istrian Peninsula has continued over the three days since leaving Rovinj. Hugging the shore wherever possible has allowed us to marvel at the glorious, clear blue, sparkling water of the Adriatic sea. On occasions we have found ourselves on rough, stoney tracks to avoid busy roads, safer, but very much harder going. After cycling around the Lim Kanal, a fjord like inlet, the next major town up the coast is Porec.

Porec is home to the earliest, best preserved site of Christian worship in the world. Now a world heritage site, The Euphrates Basilica, dates back some 1700 years to the fourth centuary. A wealth of mosaic floor and wall decoration dating back to that time has been discovered; well worth the visit.

Following a night at a room in a private house, just outside Porec we followed the coast north to the last sizable town in Croatia, Crveni Vrh, (no we don’t know how to pronounce either). Needing to use up our remaining Croatian Kona, we stayed in a room at the superbly located Pizzaria Laura, which is right on the shore with views to Slovenia’s coastal gem, Piran, and the mighty Dolomites in the far distance.

Today (Saturday) after eight miles or so, we found a windy little road that avoided the lengthy queue of traffic crossing the border from Croatia into Slovenia. We were waved through with hardly a glance at our passports and immediately picked up a paved bike path which lead us around Slovenia’s pretty but short coast; through Portoroz, Piran, Isola and Koper.

We crossed the now deserted border contol between Slovenia and Italy this afternoon. Then peddaled on through the charming town of Muggia, to the city of Trieste, which boasts some large squares, fine architecture, Roman antiquities and narrow streets. 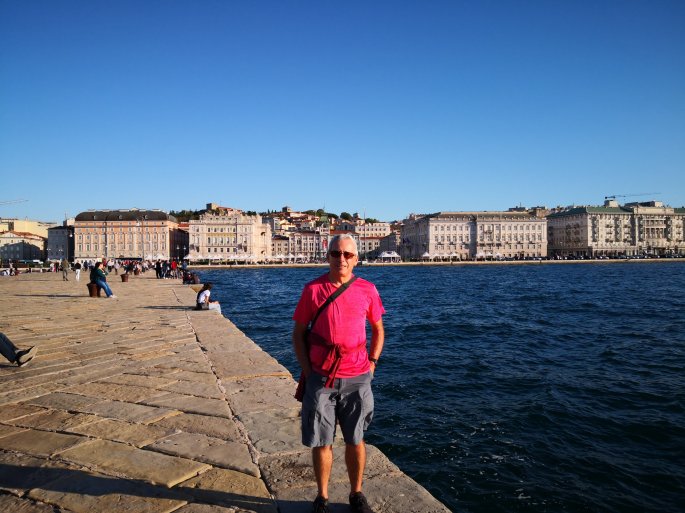 One thought on “Three countries in one day”