Our very pleasant, scenic, two day, pedal along the Elbe (Labe in Czech) ended up a distance of 120 miles. From a tiny mountain stream bubbling over huge boulders in the Krkonose mountains it became a wide navigable, major waterway with several dams and locks by the time we got to the little town of Nymburk.

The temperature leaving Spindlruv Myln was just 4°c, quite a shock to the system! We bundled up in several layers for the chilly, but speedy first 10 miles, which were all down hill. Thank heavens we brought long fingered gloves!

Sunday’s sixty miles were an absolute joy, with well signed and paved paths or roads, mainly alongside the bank of the river. The day warmed very rapidly, becoming unseasonably hot. This brought the locals out in droves; it was great to see so many people out on their bikes from the elderly with electric assistance to tiny tots wobbling along on bikes that were either way too small for them or ones they will grow into – one day. Cycling is very popular here and the network of dedicated routes and paths are amongst the best in the world. Young Mums get their figures back roller blading along the paths pushing their prams as they go. A last minute swerve by Gavin, saw him avoid running over a 4-5 foot long snake slithering across the path.

Yesterday’s ride was more challenging as the route was not always paved making it hard going with loaded touring bikes, we were very tired after 62 miles. The countryside is very flat in this region- no freewheeling, every mile has to be pedalled. We passed right through the stud farm where Lippizaner horses have been raised since Habsburg times. Fields full of the grey (white) mares with their black foals is a lovely sight. 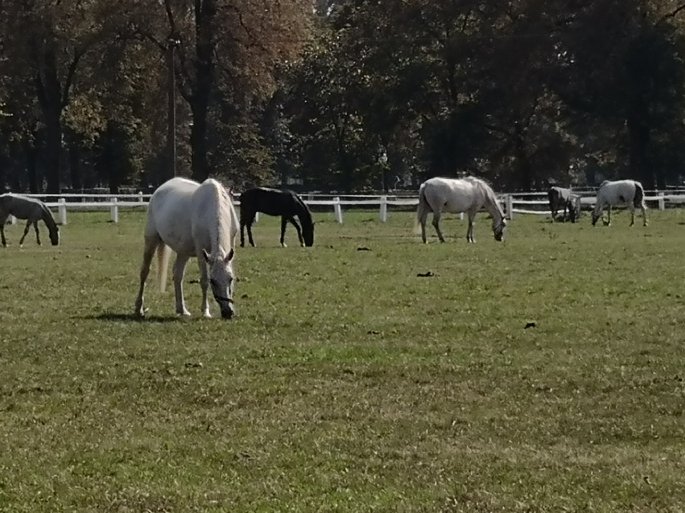 With our map showing that many of the downstream routes continue on unpaved paths, we decided to retrace our route back though town of Kolin to Pardubice. After exploring this lovely old town with its cobbled streets and fine buildings, we will commence the final three hundred miles of our trip, east through Olomouc and on to Poland.

2 thoughts on “Water, snakes and horses …”