Where else could we be other than in Austria.  A swift hour and a half flight from Gatwick to the home of the Von Trapps in Salzburg, courtesy of a British Airways captain who sounded like Robert Peston on speed. Gavin has tacked together a number of Austria’s superb cycle routes to come up with a circa 900 mile round tour back to Salzburg. 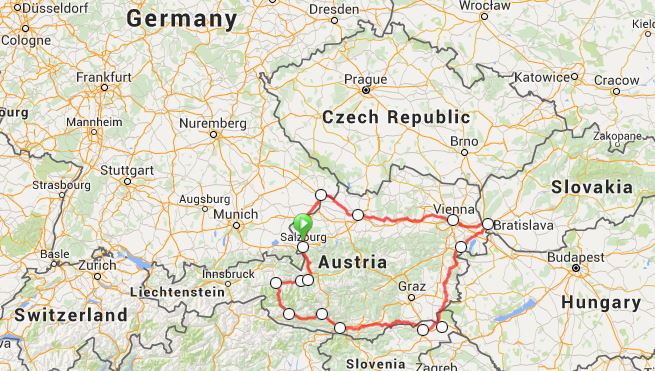 An afternoon in Salzburg allowed us to climb up to and tour the splendid medieval Hohensalzburg, a hilltop fortress built and extended by successive Bishops from the eleventh century onwards, the views from the top are stunning from the alps to the south and across the Salzach river valley to Germany in the North. We cycled around some of the locations used in the filming of the Sound of Music, Gavin now seems to think he is sixteen going seventeen for some reason. We stayed at the Hotel Schloss Leopoldskron, where many of the lakeside scenes were shot. Breakfast was in the most amazing great hall, complete with frescoed ceilings and marble pillars.

Our first full cycling day took us north along the Salzach and then Inn rivers which form the border with Germany. Handily placed bridges allowed us to cross into Bavaria to the charmingly named town of Tittmoning for a picnic lunch in the town square and then later to Burghausen which lays claim to the longest Castle in Europe extending one kilometre along a ridge above the town.

Rather damp at the end of a grey and rainy day,  it was good to roll into the charming town of Braunau am Inn some 57 miles from Salzburg.